NOTE: This post was scheduled by Daniel Saraga of Haggis and Herring before he suddenly passed away.  We have decided to ensure his scheduled posts continue.  Daniel's wife Meredith posted her eulogy to him.  Please read more about our wonderful Daniel. 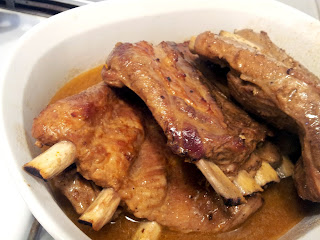 When I was at the Rickard's Cardigan launch, Brewmaster Matthews was telling me about beer-braised ribs that his wife had made. Although I wasn't able to get my hands on the recipe, I still wanted to give it a try myself.

My main problem was that I've never made ribs before. Ever. Mostly because I've been a little intimidated by ribs culture. It's very competitive and very secretive. I worked myself up to buying some ribs - so I was committed. Now to find a recipe.

I realized that finding the right recipe for me was going to be a big challenge. Many recipes took hours and hours. Some used slow cookers. I didn't have time for that - this meal was being made on a weekday. I eventually found one - beer braised ribs at Serious Eats. That recipe gave me a method that I could work with, as well as a set of ingredients that I could adapt.

It smelled great when it was in the oven and the ribs tasted great. They were tender, but not fall-off-the-bone soft. The cayenne added a nice kick as well, and the garam masala complemented the spices in the beer.


Recipes by the Haggis and the Herring: tasty world recipes tested in our kitchen
Try other tasty recipes
Posted by Unknown at 7:00 AM 1 comment: