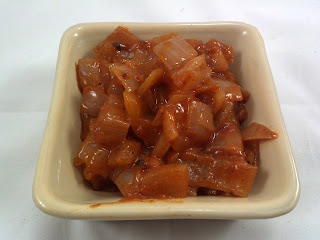 I wanted to try something new for a family barbecue, but we didn't have very much time to do anything very different. Back in May, I saw a recipe on CES for a red onion sauce popular on hotdogs in New York City, so I ran with that (with a few changes of course). The sauce isn't made of onions, it's a red sauce with onions in it. Or, more accurately, onions covered in a reddish sauce.

The resulting sauce was very flavourful, and the cayenne added a good zing to it.


Note: this mixutre isn't a pickle like relish, so it must be refrigerated and eaten within 2-3 days.


Try other tasty recipes
Posted by Unknown at 1:52 PM 4 comments: 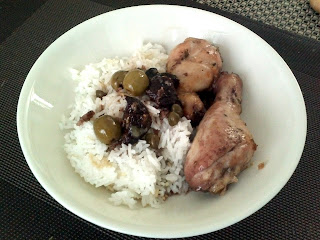 Our neighbour, Olivia, frequently invites us over for dinner when certain dishes are on the menu. One of our favourite dishes is her Chicken Marbella. It's a dish I have yet to make myself because, for some reason, I can stand in front of the stove and stir a pot for an hour, but I can't bring myself to baste something in the oven. I've got to get over that.

In the meantime, Olivia was generous enough to share her recipe, based on the recipe from the Silver Palate Cookbook, and allow me to take photos. The dish pictured didn't have cilantro as a garnish because there was an in-house shortage.

There's something about the flavours in this dish that make it irresistible. I think it's the sweet and savoury combination of flavour - it's amazing. I always use extra sauce to help mop up the rice. So tasty.


Recipes by the Haggis and the Herring: tasty world recipes tested in our kitchen
Try other tasty recipes
Posted by Unknown at 7:00 AM 1 comment: 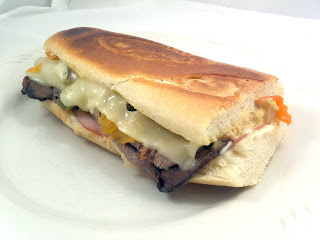 Note to SRC: my deepest apologies to Wendy for the late link-up.

It's Secret Recipe Club time again, and this month's assignment is Wendy from La Phemme Foodie. Wendy blogs from Philledelphia, where she's a lawyer by day and a food blogger and photographer by night.

For the assignment, we considered several recipes, including slow cooker ribs in a root beer barbecue sauce, as buffalo wing macaroni and cheese, but in the end, I had a craving for a sandwich, and her Cuban sandwich won the day.

We made a few changes to the recipe out of necessity. On the shopping trip for ingredients, no matter how hard I tried, I couldn't find roasted pork. Our grocery store doesn't have a proper deli, so we're stuck with packaged prepared meats. They did have sliced roast beef, so I picked up some of that.

Meredith was quick to point out that it's very unlikely that you'd be able to find a Cuban sandwich anywhere that's not made of pork, and it's even less likely that you'd find one made of beef, given the abundance of pigs and the lack of beef cattle.

We also decided to use a French baguette instead of a plain kaiser roll. That's was simply because I'm not keen on huge, overly heavy breads.

In the end, the sandwich turned out really well. It grilled nicely in our panini press (we chose the griddle attachment) and was warm and tasty. We'll likely be making this again


Recipes by the Haggis and the Herring: tasty world recipes tested in our kitchen
Try other tasty recipes 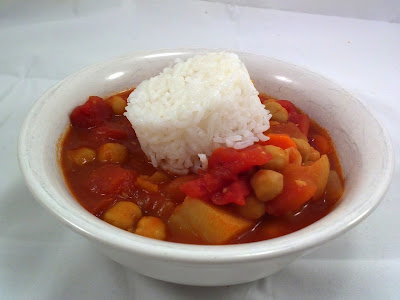 At the end of a week where we ate a lot of meat, I was happy to cook a meal that was vegetable-heavy and easy to prepare.

I had recently read a couple of vegetarian recipes involving chickpeas and this was the result of combining bits and pieces from each. I went easy on the spices, so the stew was pretty mild. I think you could easily double the garlic, chili powder, cumin and cayenne to get a more powerful flavour, but the vegetables themselves were still flavourful when topped with rice.

Jeremy rooted through his bowl and cleaned out all of the chickpeas. He seems to enjoy just about anything as long as it's accompanied by some sort of sauce or other flavouring. Lucky me.

Try other tasty recipes
Posted by Unknown at 7:00 AM 5 comments: 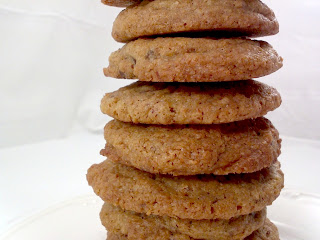 We don't make bacon often, but when we do, we occasionally save the rendered fat in a jar and store it in the back of the fridge. I'd joke about using it to make fried bread once in a while, but I never do.

Putting bacon in everything has been a trend for some time. I think it's part of the sweet and salty combination that makes the flavours attractive. I've seen bacon with chocolate and bacon-topped cupcakes. Meredith wanted to use some of that bacon fat for cookies, so we started looking.

The more reasonable recipes used about 1/2 cup bacon fat (as substitute for 1/2 cup butter). I know - that can't be healthy. We weren't expecting it to be. And there had to be some crumbled bacon as well.

The cookies were pretty good. There was a slight aftertaste that was a little strong, but I attribute that to sediment in the bacon fat - extra salty bits. I think I should've put the hot bacon fat through a coffee filter first, because it was a little cloudy. I've done it before and I'll do it next time - if there is a next time.

Try other tasty recipes
Posted by Unknown at 7:00 AM 2 comments: