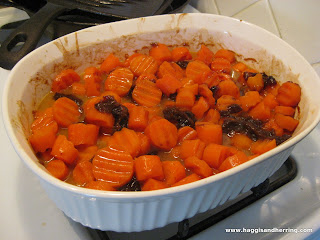 We were bound in Egypt

...and after eating all that matzah on the run, we were bound again. And that's why we eat matzah during Passover.

And we were given Tsimmes.

But seriuosly, Passover can be hard(er) on the digestive tract than other Jewish holidays. Thank gosh for tsimmes: a sweet mixture of vegetables and other fibrous fruits. My favourite is carrots and prunes.

Instructions
1. Preheat oven to 350-degrees.2. Boil carrots until tender (not mushy), for 5 minutes and slice to 1/4"-1/2" rounds.3. Place carrots in a mixing bowl with prunes.4. In a small saucepan, melt butter, sugar, cinnamon and nutmeg and stir until smooth. 5. Stir potato starch into orange juice and then combine with butter and sugar and heat until just boiling.6. Pour mixture over carrots and prunes and mix thoroughly.7. Transfer everything into a covered baking dish and bake for 20-30 minutes. 8. Uncover and bake for an additional 20-30, or until carrots are soft and mixture is bubbling.
Details
Prep time: 20 mins Cook time: 1 hour Total time: 1 hour 20 mins Yield: 10-12 servings
Recipes by the Haggis and the Herring: tasty world recipes tested in our kitchen 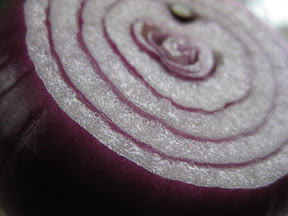 With the winter winding down, the endless potlucks at work are being replaced by walks to Tim Horton's (it's Roll up the Rim contest season). Still, you can always smell something good coming from the kitchen as someone unwraps a fragrant dish.
At what I think was our last potluck of the season, a really tasty mango salad appeared. I ended up taking the recipe and modifying it slightly so I could use it as a sweet topping for fajhitas at home and it tasted excellent.
Mango and Red Onion Salad
Posted by Unknown at 9:00 AM No comments: 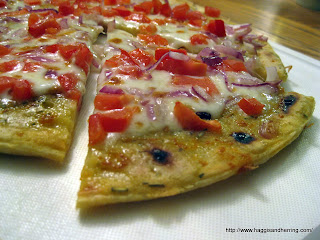 (originally published March 14, 2010, republished for Meatless Mondays)
Since today is about remembering (but not like the more important days of not forgetting), I thought it would be appropriate to talk about the fabled bag of chickpea flour today.
A few months ago, a colleague told me about a bag of chickpea flour she had in her pantry. Her daughter had bought it to prepare a dish – apparently it was a one-time thing. I gladly offered to take it off her hands.
About a month later, she announced that the flour had made it from the pantry to the hallway, and would eventually make it to work. A few weeks later, I suggested blocking the front door with the flour so she won't be able to leave home without picking it up.
Shortly after, the flour arrived.
The next question was "what to do with it?" It wasn't until then that it dawned on me that chickpea flour is gluten-free. I immediately thought of my brother and sister-in-law of Gluten Free Edmonton and cobbled together a recipe for a cast-iron pizza with tomatoes and onions that's fried and then broiled.
Chickpea-flour Pizza in Cast Iron
Posted by Unknown at 6:30 AM 3 comments:

Don't forget to change the clocks!

Since today is about remembering (but not like the more important days of not forgetting), I thought it would be appropriate to talk about the fabled bag of chickpea flour today.

Try other tasty recipes
Posted by Unknown at 6:30 AM No comments: 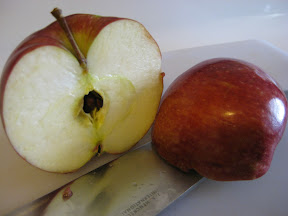 Yet another story from last year's pre-Christmas party:
Mel, our fitness and health conscious friend opted to bring dessert for the potluck/get-together. It was really great: sliced apples with an insanely yummy creamy caramel dip. How can you go wrong with anything that has cream cheese and Skor bars in it? And how did healthy Mel manage to not devour the entire thing before getting to the party?
After filling myself up with dessert, I promptly forgot to ask Mel how to make it until a few weeks ago when colleague asked me about a similar dish. So I finally emailed Mel to ask. The recipe was so simple, Mel quickly tapped it out on her BlackBerry – not even waiting to get home. 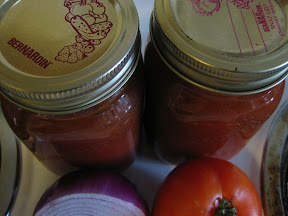 This basic marinara sauce can be added to ground meat, vegetables, lasagna or meatballs.


With some leftover white wine from a big dinner, I was itching to make a marinara with wine. The bonus day off work (Family Day in Ontario) gave me the opportunity to prepare a meal in advance for later in the week.
I managed to find some turkey meatballs at the grocery store so there was no doubt about what I'd be making, until Meredith put the kybosh on spaghetti for dinner (she says it's a taste thing, I think it's Itironophobia (fear of spaghetti). So meatball marinara with penne it is!
Marinara Sauce