(adapted from original recipe on recipezaar by Barb Gertz)

Although I love cooking, I don't always love deciding what to make on a Friday night. If I'm not inspired, I'd end up making old standards which are nice sometimes, but there's always room for something new.

Lately, Meredith has taken the reins and has either thrown out ideas for me to search (ingredients, spices, types of cuisine) or sourced the recipe herself. A few weeks ago, she discovered a fantastic balsamic chicken recipe which is perfect for a Friday night. There's very little prep work involved for those evenings when you don't want to start dinner at 8:00!

Recipe: Balsamic Roasted Chicken with Oregano
Posted by Unknown at 6:00 AM 1 comment: 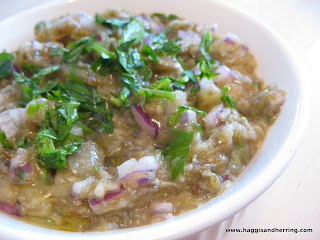 Posted by Unknown at 6:00 AM No comments:

So much eggplant, so little time

I realize now that I've eaten a lot of eggplant over the years. It's not my favourite vegetable, I just really like working with it. There are so many ways to prepare it.

Last Friday, I tried a new Moroccan eggplant salad recipe that involved roasting the eggplant, but the remaining ingredients are just tossed in. Something new.

Student life in Peterborough, Ontario was a frugal one. We didn't often hang out at pubs and clubs, opting to take turns hosting dinner parties instead. The booze was cheaper and, more often, the food was decent.

I didn't realize how much time I had on my hands when I was a student. Class was over by lunchtime on Friday and if it was my turn to host, I had all afternoon to cook.

One of the more memorable dinner parties I attended was Giles Grierson's big perogie party. Giles found the recipe on the sleeve of a Rythm Activism record sleeve. I think he actually quadrupled the recipe because of the number of people attending.

Making the perogies was quite the production. We started in the early afternoon and weren't finished until late in the evening. Aside from the massive amounts prep work involved, the recipe called for copius amounts of vodka which we assumed was meant for the chefs during preparation. While we did control ourselves, the alcohol surely contributed to the amount of time it took us to prepare the meal.

Meanwhile, combine all the stuffing ingredients in a big ball, and season to taste. Don't be afraid of lots of garlic - it's good for you.

Brown the onions and garlic in the butter and then add remaining sauce ingredients and simmer.

Stuff the perogies: hold a dough square in the palm of one hand, wet to joining sides of it with your finger, add about 1 teaspoon of stuffing in the middle, the fold the dough dry corner to wet corner to form a triangular "hat" and pinch the two sides shup firmly. Lay the stuffed perogies gently on a tray keeping them seperate from each other, then add to boiling water, about 10 at a time, stirring gently 3-5 minutes, until they float to the surface. They're ready.

Back to the sauce: coat a good sized casserole dish with a bit of sauce, then alternate layers of perogies and sauce.

While perparing the perogies, don't hesitate to toast major accomplishments regularly with a coderate shot of vodka, followed immediately with a chaser of hot tea.

Posted by Unknown at 6:00 AM No comments: 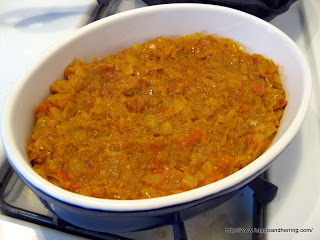 And yet another fun Indian Friday night with friends. Chicken Tikka Masala and an eggplant dish from India Food House. I'll save the Chicken Tikka recipe for another week, tho :-)

India Food House was a landmark in Peterborough when I was at Trent. I hung around so much I was eventually put to work in the kitchen – mostly preparing naan, peeling garlic, and doing dishes.

Only once, when the restaurant was short-staffed on a busy day, I actually waited tables.

Nathan brought some excellent samosas as an appetizer tonight. They were big, light, not oily at all and were spiced really well. Kinda like the perfect matzo ball:

Surati Sweet Mart, 26 Carnforth Road, Toronto
Posted by Unknown at 12:01 AM No comments:

Email ThisBlogThis!Share to TwitterShare to FacebookShare to Pinterest
Labels: restaurants 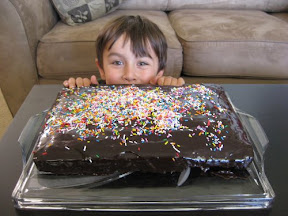 Jacob and Meredith made me the best birthday cake ever.

Sweet Sadie's Chocolate Cake with Dark Chocolate Icing
by Penny Martin July-1-2009
Jacob and Meredith made me the best birthday cake ever. Cake recipe from Sweet Sadie's; icing from Better Homes and Gardens.
Ingredients
Instructions
1. Preheat oven to 350-degrees and grease a 12 x 9 cake pan.2. Sift the dry ingredients together.3. Mix the dry ingredients in the mixer bowl (low speed).4. Add oil, eggs (one at a time until incorporated), vanilla and milk (medium speed).5. When batter is smooth, add boiling water ( start on low and be careful that it doesn't splash!).6. Pour into prepared pan and bake approx. 35- 45 minutes or until a toothpick comes out clean.Note: Cool the cake completely before icing.For the icing:
1. In a medium saucepan, bring whipping cream just to boiling over medium heat.2. Remove from heat and add semi-sweet chocolate (do not stir) and let stand for 5 minutes.3. Stir untill smooth and cool for 15 minutes.Spoon evenly over cake.
Details
Prep time: 20 mins Cook time: 1 hour Total time: 1 hour 20 mins Yield: 1 12x9-inch cake.