When my mother-in-law told me that she had made baked beans from scratch, Meredith and I were excited to try it. We were equally disappointed to find that they were already gone.

Fortunately, it didn't take much pleading for her to make a batch for us. The beans arrived - slow cooker and all - and there was much more than expected. But we didn't complain - more for us. We're big fans. Sausage and beans, potatoes and beans, beans on toast, beans and Kraft Dinner. Not that we usually eat these meals consecutively.

I've never made baked beans from scratch myself. My slow cooker just isn't big enough, and the bowl doesn't remove for easy cleaning. Still, I was very reluctant to part with it because it was a gift from my (now deceased) grandparents.

A couple months later, I stumbled upon a large slow cooker for $10 at a garage sale and I I finally got the recipe from my mother-in-law (the beans pictured in the photo are hers).

The recipe is mostly based on a Chatelaine recipe. I read the reviews and they were mixed. I suspect that several readers cooked the beans on high and quickly dissolved most of the liquid in the cooker. Unfortunate for them, but great for me. The beans we feasted upon tasted great. 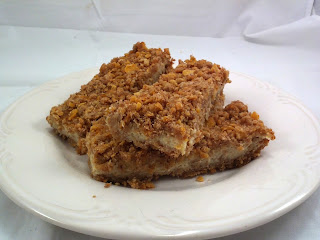 Meredith was looking for something relatively healthy to give Jeremy as a snack - preferably something not terribly messy. We're still working on it, but these yogurt bars still hit the spot.

Meredith first attempt used oats the first time and although they tasted great, it was more of a falling-apart crumble. And Jeremy found them a little dry. He stuck his tongue out until the bits fell back onto the plate. Whoops.

The second attempt, using corn flakes (more along the lines of the recipe our friend gave us), turned out much better. The cut nicely into bars and held together. Jeremy loved them - the most important part.

Try other tasty recipes
Posted by Unknown at 7:44 PM 1 comment: 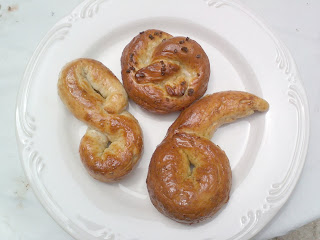 It's Secret Recipe Club time again, and June's assignment is Karen Cooks. Karen blogs from Montana and has all sorts of great recipes that we'd love to try, including chicken marsala, grilled pineapple guacamole, venison stew, and a really tasty looking cheesecake.

After reviewing Karen's recipe index, I knew exactly what we were going to make right away. Soft pretzels. We'd conquered bagels in a previous month, and it was time for the next baking challenge.

We only changed a couple of things out of necessity: we ran out of white flour, so we substituted in 1/2 cup of whole wheat flour, and, and instead of Kosher salt, we substituted some lime-infused sea salt were were given as a gift for such a special occasion.

Forming the pretzels was fun as well. Our eldest son used the pretzels as an opportunity to shape them into numbers.

These pretzels are best served immediately and don't fare well as next-day offerings. That wasn't a problem for us - they were gone by the end of the evening. 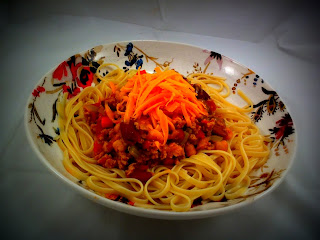 Yes, another chili recipe. This one is mostly from scratch, tho. Inspired by a combination of different recipe concepts and what I happened to have available.

My original plan was to make buffalo chicken chili. However, we didn't have any bleu cheese. Not completely foiled, cheddar would still do. I also didn't have a proper wing sauce, so I used hot pepper sauce and compensated by frying the vegetables in butter instead of oil.

Then the issue of what to serve with it arose. We've had a lot of rice lately, so I suggested pasta. Of course, chili served on pasta and topped with cheese is really Cincinnati-style, so suddenly Cincinnati and Buffalo had to hash it out.

I thought the sauce turned out a little thin, however, I opted to not add any tomato paste. I also thought that the chili needed more spice. I added additional sauce when I served it. It could simply be because of the sauce I used. I'll leave it up to your own personal tastes.

Cincinnati-style Buffalo Chicken Chili
by Daniel Saraga June-8-2012
Cincinnati chili is served on pasta and topped with lots of cheese. It's a great alternative to tortilla chips.
Ingredients
Instructions
1. brown the ground chicken, garlic, paprika, oregano and cumin in 2 tbsp oil over medium-high heat, using a potato masher to evenly break up the pieces.Set chicken aside.2. Heat on medium and add onions, celery and carrots. Let simmer until tender (10 minutes).3. Transfer the chicken back into the pan and add the tomatoes, beans, and hot sauce and bring to a boil.4. Reduce heat to medium-high and let simmer for 30 minutes to reduce the liquid.Serve on top of pasta, topped with cheese.
Details
Prep time: 15 mins Cook time: 1 hour Total time: 1 hour 15 mins Yield: 4 servings


Try other tasty recipes
Posted by Unknown at 7:00 AM 1 comment: 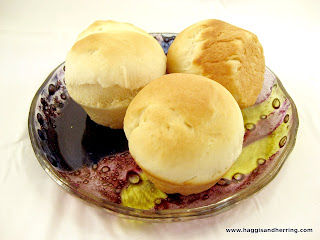 Clearly, Meredith was inspired by The Muffin Tin Cookbook, by Brette Sember. She decided to adapt a recipe for muffin tins on her own when we were going to a family dinner. Not wanting to bring another dessert, she tried a bread recipe instead.

Much of the recipe is based on the Better Homes and Gardens dinner rolls recipe, however, these rolls are much bigger. The original recipe quoted 24-36 rolls, while Meredith's recipe resulted in sixteen rolls.

Muffin Tin Dinner Rolls
by Meredith Burbidge June-1-2012
Much of the recipe is based on the Better Homes and Gardens dinner rolls recipe, however, these rolls are much bigger. The original recipe quoted 24-36 rolls, while Meredith's recipe resulted in sixteen rolls.
Ingredients
Instructions
1. Combine yeast with 1/4 cup warm water and 1 tsp sugar, mix and let sit for 10 minutes.2. In a small saucepan on medium heat, stir together milk, sugar, shortening, and salt until warm (120-130 degrees Fahrenheit) and the butter is almost melted.3. Using a standing mixer, combine 1 1/2 cups flour and yeast and continue to mix. Using the low setting, slowly add the milk mixture and let combine for 30 seconds, scraping the sides of the bowl.4. Increase speed to medium and slowly add the remaining flour. Continue to beat for three minutes.5. Remove dough from mixer and shape into a ball. Rub dough with 1 tsp oil, place in a large bowl and cover with plastic wrap. Let dough rise for one hour.6. After dough has risen, grease enough muffin tins for sixteen items.7. Divide dough in half. Divide each half again three more times until you have sixteen pieces. Roll each piece on a lightly floured surface and place into the greased muffin tins. Cover, and let rise for an additional 30 minutes.8. While dough is rising, preheat oven to 375-degrees.9. Brush rolls with egg wash using a pastry brush and bake for 12-15 minutes, or until golden. Remove from tins and let cool on wire racks.
Details
Prep time: 1 hour 50 mins Cook time: 15 mins Total time: 2 hour 5 mins Yield: 16 rolls


Try other tasty recipes
Posted by Unknown at 7:00 AM 3 comments: