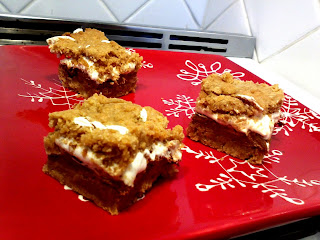 I've never bought marshmallow fluff before, however, I bought two jars of it the week before Christmas.

One jar was for a dessert Meredith was making for a get-together. When I found out that she was buying fluff I immediately wanted to make a fluffernutter sandwich, but I was told that the entire jar was already called for. So I bought myself a second jar as well and made myself the famed peanut butter and marshmallow-fluff sandwich. It was yummy.

Anyway, I'm supposed to be writing about the dessert that Meredith made. She pretty much went along with a recipe she saw in the newspaper and it turned out excellent. We bought a couple slabs of Lindt milk chocolate and they fit nicely in the pan, side-by-side. What a great idea.


Try other tasty recipes
Posted by Unknown at 4:37 PM