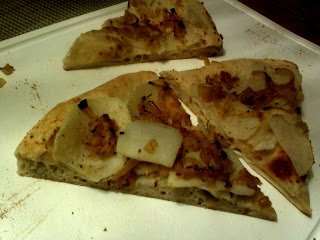 Having recently discovered that our local grocery store carries prepared pizza dough (although it's practically hidden in a corner), Meredith decided it was time for us to slow down on our occasional frozen pizzas.

Well, if we weren't going to have frozen pizzas, I didn't want us to stick to a standard pizza. My mother's friend used to make us a great tasting potato pizza, and I wanted us to try something along those lines. This particular project ended up being a joint-effort for Meredith and I, where I prepared the topping and Meredith made sure the pizza actually looked and tasted like a pizza (toppings placed correctly, baked without getting burnt, etc.).

What made this recipe taste so great was the carmelized onions combined with the rosemary.

We used the entire package of dough for a single pizza when, in hindsight, we could've spread it out into two thinner pizzas (requiring you to double the recipe for the toppings).