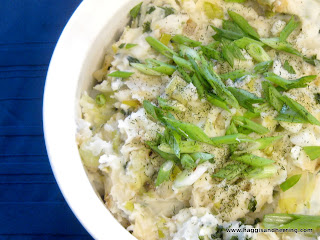 Another St. Patrick's Day has passed and this year I tried another new recipe.

St. Patrick's Day is special for us because it was my late brother-in-law's birthday. He passed away from a skiing accident a week before he turned 15. We always have a nice meal with friends and family and toast Jeremy on St. Patrick's Day. He would've been 35 this year. Our son Jeremy is named after him.

This year, dinner was Irish onion soup, corned beef, Yorkshire pudding and colcannon. Colcannon is a mashed-potato dish with cabbage, leeks and (sometimes) kale. I thought the leeks was also a neat nod to Meredith's grandmother who was born in Wales. I've never actually cooked with kale, so I thought it would be an interesting adventure.

I understand that kale can sometimes be bitter, however, I was hoping that cooking it really well in butter with salt and pepper would fix that, and it did.

From all of the recipes that I looked at to cobble this together, one in particular caught my attention in the method department so I borrowed from it. Just because of the quantities of vegetables, I split the frying into two batches, one for the kale, and one for the cabbage. I think it would've been messier if everything was in the pan at once.

The final result turned out great. I attribute the results to the butter, not-too-high fry temperature and the good company.

Colcannon (potatoes, cabbage, leeks and kale)
by Daniel Saraga April-13-2012
This colcannon recipe is a combination of a few different recipes and methods that I read about.
Ingredients
Instructions
1. Boil potatoes for 30 minutes and set aside.2. Discard most of the leek greens and slice leeks into 1/4-inch crescents.3. In a deep pan, Heat one tbsp butter medium-low add half of the leeks. Saute until leeks are soft.4. Add kale and 1 tbsp butter and saute for another minute.5. Add salt, pepper and 2 tbsp water, cover and reduce heat to low.6. Cook for 15 minutes, stirring once, until kale is soft.7. Set leek and kale mixture aside in a separate bowl. Return pat to medium-low heat, add butter and remaining leeks to the pan.8. Saute leeks for one minute and add cabbage. Saute cabbage and leeks for five minutes.9. Add salt and pepper, lower heat and let simmer for 10-15 minutes (turning cabbage once) until cabbage is soft and slightly browned (add water if necessary).10. Mash potatoes and add milk or cream.11. Gently fold in leek and kale mixture, then fold in leek and cabbage mixture.12. Garnish with green onion and dill before serving.
Details
Prep time: 30 mins Cook time: 1 hour Total time: 1 hour 30 mins Yield: 8 servings

Recipes by the Haggis and the Herring: tasty world recipes tested in our kitchen
Try other tasty recipes
Posted by Unknown at 7:00 AM