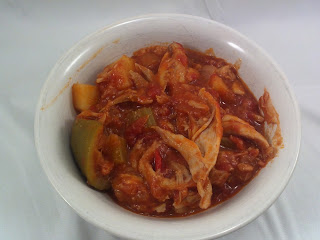 The story of Cornie's is an old one for us. On our first cruise, Meredith and I ended up hanging around a beach in St. Maarten for much of the day sitting in beach loungers, reading, drinking beer and eating chicken.

Cornie's was a little shack with a patio near where we rented our loungers and beach umbrella. The initial attraction was the two-for-$3 bottles of beer, but lunch was a pleasant surprise. 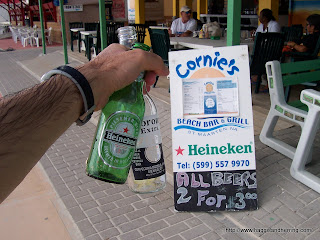 At the counter, there was a large pot of chicken slowly cooking on a burner. We were told it'd be ready by lunch time and lunch was great. There was something in it that reminded me of my grandmother's Saturday afternoon chicken dish, and I liked how it tasted - so I asked for the recipe. I didn't get much out of it aside from some ingredients (no quantities) and a general order of what to add when scratched on a piece of paper.

Knowing that I'd eventually lose that paper (and I did - I have no idea where it went), I typed out the instructions and emailed it to myself. Once a year or so I'd look at it and say to myself "I should really give this a try soon." It wasn't until this March that when deciding what to make for supper, I gave Meredith the option of me giving Cornie's chicken dish a try (as an experiment), or another of my standards.

Meredith chose Cornie's chicken and when I left work that day, I picked up the ingredients and got to work. I think the real trick to this is to let it cook for a long time, to let the flavours blend, the chicken fall to pieces, and the sauce to thicken. I don't claim to have nailed the quantities of ingredients on the first try, but it's good enough and tasted great. I've been avoiding excess amounts of sodium so I used no-salt canned tomatoes, low-sodium soy sauce and low-sodium ketchup. Either way, with those products as part of the process, there's likely no need to add any extra salt.

Our friend who joined us for dinner that day pointed out that the recipe was a variation of a frickazee.

Meredith thought that there was a little too much lime in the mix, so I'll actually discard the lime after the marinating next time, instead of letting the lime pieces cook in the stew (I've reflected that in the instructions as well).

Cornie's Home Made Chicken
by Daniel Saraga April-6-2012
This chicken recipe is from a small eatery in St. Maarten.
Ingredients
Instructions
1. Place the chicken in a large ziplock bag and squeeze juice from lime quarters into bag. Add squeezed lime and vinegar, close and shake bag to coat chicken.2. In a small bowl, whisk together the ketchup, soy sauce, onion powder and garlic powder, and add to the bag of chicken, shaking to coat evenly. Refrigerate for at least an hour, or overnight if possible.3. In a dutch oven, heat oil on medium.4. Add onions and celery and fry for 3-5 minutes.5. Add garlic and fry for another minute.6. Add tomatoes, potatoes and chicken (discard the lime pieces) and bring to a boil.7. Reduce to medium-low and let simmer for at least 60 minutes, stirring occasionally. Sauce should be thick and chicken should be falling off the bone when done.
Note: always check the label for gluten-free labelling on prepared sauces (e.g., ketchup and soy sauce).
Details
Prep time: 15 mins Cook time: 1 hour 10 mins Total time: 1 hour 25 mins Yield: 4-5 servings