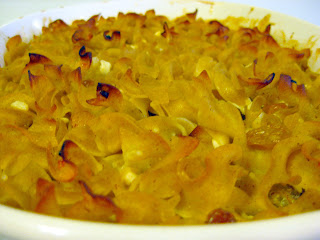 Back in university I had a great lockshin kugel recipe that I eventually lost. It was okay, and it had cottage cheese. When I asked mom about her recipe, she began describing the kugel that my Zeidy Sam used to make. It didn't have cottage cheese, but it was very sweet and apparently he liked it extra cripsy. Although I'm probably too young to remember it, I vaguely remember a similar kugel that Baba (my Bubbie) might have made when I was a child.

I switched around the recipe, including adding the cottage cheese and reducing the sugar and stuck to the crispy theme. It turned out right the first time. I'm very happy.