Rickard's Cardigan: Get it While it Lasts 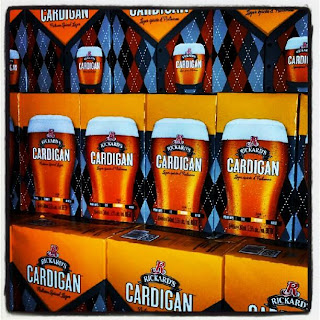 Earlier this week, my friends at MolsonCoors invited me to the launch of their first seasonal beer: Rickard's Cardigan. Meredith was unable to attend (and was quite upset about it), so I was accompanied by my close friend Kristian instead. After our first sip, we were both sold. 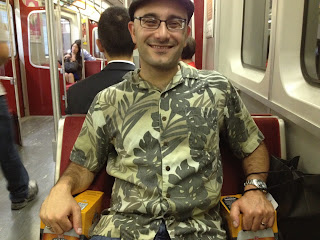 Cardigan was developed by Brewmaster Gary Matthews who drew inspiration from what fall means to him – preparing for the upcoming holidays. Cardigan has hints of cinnamon, nutmeg, cloves and brown sugar, so it does just that. Memories of preparing for Thanksgiving (and Rosh Hashanah) immediately came to mind and the beer pairs well with seasonal foods like turkey, ribs and other sweeter dishes. It's a great tasting beer.

Kristian noted that "there is no shortage of seasonal beers on the market – winter ales and summer lagers (typically involving some sort of citrus accompaniment) come to mind. The beauty of Cardigan is that the taste really does conjure up all that is synonymous with autumn." 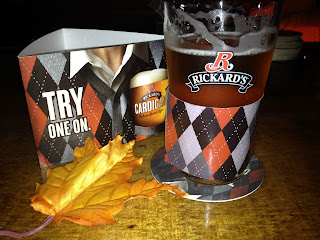 The packaging is clearly a nod to the Argyll sweater-wearing, Instagram-snapping hipster and I think it's a great move.
Not only does the packaging really catch your attention, it points out that a large beer company can jump out of the mainstream with a micro-brew-style product.

Of course, if Rickard's is looking to take things up a notch and pick up a spokesperson, this particular hipster has a secret identity: 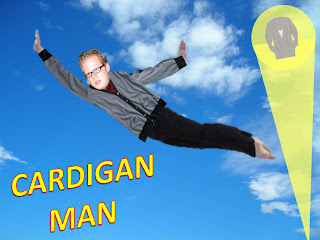 Turning the focus back to the event, Brewmaster Matthews gave us a generous portion of his time to discuss Cardigan, beer in general and other topics, including fresh-water scuba diving and cooking.

Matthews took his undergrad in Environmental Sciences at Trent University (my alma mater) back in the 1980s. The transition into brewing came about when he started a job as a lab assistant at Molson. He continued in various different jobs until he was offered a position as a brewer. He even put off his honeymoon to attend brewing school - that's dedication!

Matthews is currently working on his next project: Rickard's seasonal brew for this upcoming winter. I'm really looking forward to trying it.

Back to the beer and food! Some of the food served at the event was actually made using Rickard's Cardigan. This included pulled-pork sliders with a Cardigan-based barbecue sauce and chicken skewers with a Cardigan glaze. Matthews even told me about a beer-braised ribs recipe his wife has made on a few occasions.

I'm hoping to get my hands on at least one or two of those recipes shortly. Hopefully I'll have time to make one before we run out. Which leads me to something very important:

Rickard's Cardigan is a small run for a big brewery like MolsonCoors. They estimate that it should be available at The Beer Store until around Remembrance Day, however, if it sells out faster, stocks won't be replenished and you'll likely need to wait at least until next year.

Pick up a case while you can.


Try other tasty recipes
Posted by Unknown at 5:00 PM

Email ThisBlogThis!Share to TwitterShare to FacebookShare to Pinterest
Labels: beer