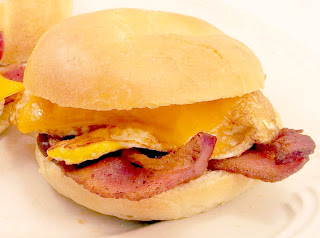 At the end of August, I read an article about an ongoing debate on the ultimate bacon sarnie (sandwich) in The Register, a UK-based technology magazine. The author, Lester Haines, welcomed readers to email in their photos by Friday, September 14, so here it is.

To prepare, Meredith and I had a deep discussion about how we'd make our ultimate bacon sarnie:

Bread: bread can be a contentious issue. Clearly, a proper English sarnie would be built upon slices of hand-sliced white bread. Well, we had just finished our loaf and chose a different avenue. Instead, we opted to get some Gryfe's bagels - one of the best bagels you can get that's not baked in Montreal.

Bacon: our initial thoughts would be to Canadianize the sarnie a bit further by using pemeal bacon. That thought lasted until we realized that we already had some traditional slices in the freezer from a local butcher.

Sauce: there was no debate here. It must be brown sauce, and it must be HP's brown sauce in particular.

Eggs: yes, our sarnie has an egg. We hope it's not interpreted as an Aussie move, we just thought it would go really well with everything, and it sure did.

Cheese: this is where things fell off the rails, sorta. We trotted off to the nearest grocer with high hopes to get some old Cheddar. We didn't want to buy the generic 1/2 kilo block of tasteless cheddar - we wanted something nice from the deli. There was only one problem: the Cheddar was made in Normandy. Say what? Yes, Normandy, France. We're hoping to be forgiven for that particular indiscretion. We're keeping the bagel, but we're hoping for proper English Cheddar for our next go.

Verdict: this is the ultimate bacon sarnie. The bagel wasn't overpoweringly dense and allowed you to taste the rest of the sandwich. The brown sauce complimented both the bacon and the egg, and the cheese, despite surrendering as soon as it touched the egg, added just the right flavour.