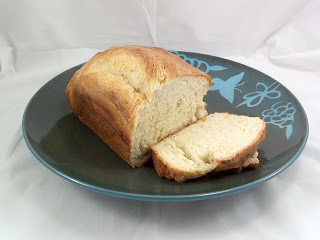 Meredith wanted to make bread for some friends who were coming over for dinner one evening, and she had all day to make it. It was pouring outside and Jeremy was feeling a bit under the weather as well.

For Christmas, Meredith's mother gave her a copy of the Five Roses cookbook, knowing it's the same book that her grandmother used (an earlier version, at least). In my opinion, the recipe for white bread is quite a task. There's lots of punching and kneading, and even more waiting. I guess that's why I don't bake.

The bread itself turned out great. We used it with our dinner that evening and shared some with the neighbours (who's going eat four loaves?!)