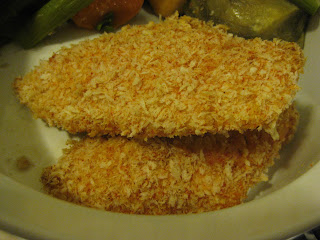 Meredith has been off of my more flavourful creations lately, so it's been tough trying to make tasty meals. Most dinners start with me putting spices under her nose and seeing if she gags.
I picked up some panko-stlye (Japanese) breadcrumbs a while back and decided to use them with some chicken for a family dinner with the parents. The chicken was tasty and met Meredith's more recent standard of flavour tolerance.
On that note, I've been invited to my mother-in-law's to make a curry and just make a separate dish for Meredith. We'll just eat outside so the smell doesn't overwhelm anyone sensitive. Hopefully that'll happen soon. I miss curries and tajines.
Panko-breaded Chicken Breasts