Review: The Encyclopedia of Sandwiches 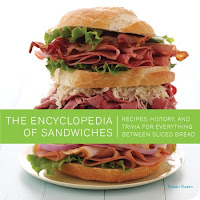 I was fortunate enough to get my hands on a review copy of The Encyclopedia of Sandwiches by Susan Russo (published by Quirk via Random House). As soon as I took it out of the package I knew it was going to be a good read. A smaller plate-sized book full of delicious photos (by Matt Armendariz) and stories about sandwiches - and recipes, of course!

Russo gives a detailed, but not long-winded overview of the history of the sandwich and pays homage to many of the standards, as well as some of the more obscure (yet historical) works not frequently seen in public. Dessert sandwiches, open-face and pita filled creations are included, as well as the common hamburger and frankfurter (both included since they fall within Russo's definition of sandwich). Yes, the standard Peanut Butter, Club, and Fried Bologna and Grilled Cheese sandwiches are there (including some trivia about the sandwiches themselves), but there's far more to it:

There are also some fairly sophisticated sandwiches that once seen should make a regular appearance on your table:
Okay, I think you're starting to get the picture.
In terms of attention to detail for a book that includes recipes, what really caught my eye in this book is that the ingredient index is in the front of the book - very practical when you're staring into your fridge and spot what's left of the hummus, and are wondering what to do with it.

Instructions for building the sandwiches are very well written, with ingredients on the left and directions on the right, with notes at the bottom for any variations or extra tidbits of information.

If you love sandwiches or if you're someone who has trouble deciding what to do with the leftover turkey dinner, I recommend picking up The Encyclopedia of Sandwiches.

Deciding which sandwich to recreate was a challenge. Did I want to try a standard, something fancy-pants, or something more on the wacky side? I decided to go with sardine. Sardines aren't the first thing someone of my generation thinks of when you say "do you want a sandwich?" Maybe my parents. Certainly my grandparents generation.

Sardines, in my opinion, are an up-and-coming food. They're full of iron, calcium (from the bones), Omega-3s and they're low in mercury and other toxins since they're such a small fish.

Russo's sardine sandwich is on rye bread (as it should be) and uses sardines packed in oil, spicy mustard, lemon juice and red onion. The sandwich itself was initially brought to North America by Scandinavian immigrants and quickly made its way into New York delis. And Russo doesn't fail to mention the downside of the sardine sandwich - fragrant breath that might not appeal to the average person sitting nearby.


My sardine sandwich was on a medium rye bread, and it was excellent. The lemon removes some of the fishy taste you get with sardines (not that I mind it), and gives it a lighter taste.