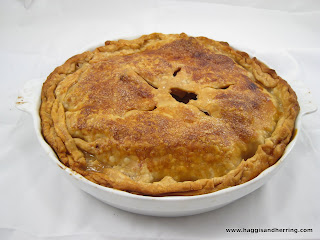 In September, our friend Penny, of Sweet Sadie's Baking, entered a pie baking contest at Chudleigh's apple farm. Meredith assisted preparing the crust and we all pitched in to peel and core the apples.

Meredith's pie wasn't as refined (we bought a prepared crust), however, she based her filling on Penny's method.