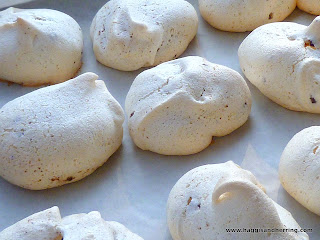 On a Sunday near the end of October, our neighbour dropped by to ask Meredith for some help with baking. She had a bunch of egg-whites left over from a previous dish and Meredith suggested making macaroons.

Not wanting to make something conventional, Meredith brought some mint extract with her. Clearly, there was already some chocolate waiting to be used.

The end result was a tasty batch of chocolate mint macaroons. Lucky me, I managed to steal a sample before they went away.