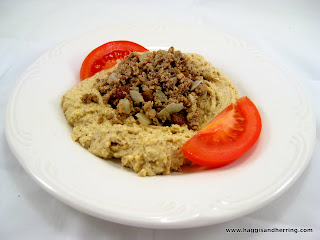 Whenever my brother-in-law comes to town, we frequently end up eating middle-Eastern food, and his most recent trip was no exception.

The very first time I met him, I had just returned from Israel determined to duplicate the amazing felafel I had near the Western wall. It was served wrapped in a huge piece of thin, round flatbread, contained every salad imaginable (eggplant salad, hummus, moroccan carrots, beet salad, etc., etc.) and it had French fries in it. It was unbelievable. Our apartment smelled like felafel for a week after all of the deep-frying.

The next time, we took him to our favourite Israeli-Mediterranean restaurant, Me Va Me, where Meredith and I had one of our first few dates. On that date, Meredith and I shared a large salad plate (with various Mediterranean salads) and had a couple of pints - more than enough for two people. After finishing, Meredith asked me "why doesn't all baba ghannouj taste like that?" to which I answered, "It does. You just haven't been eating baba ghannouj. You've been eating generic grocery store fake baba ghannouj. If it was real, it wouldn't have mayonnaise in it!" She hasn't eaten the fake stuff since.

Me Va Me's Shawarama is also top notch, as is their felafel, an inexpensive add-on to a salad plate if you're not going to indulge in shawarama or their excellent grilled fish.

Anyway, for this most recent visit, it was actually a coincidence that I was making this particular dish, as I didn't know he was coming at the time. We weren't expecting to see him until Thanksgiving. I had just been reading about different ways to serve hummus when I came across a few article that mentioned serving it with meat, and I realized that I could have a complete meal quite quickly.

One of my tricks when working with ground meat is to use a potato masher in the pan to evenly break-apart the meat.