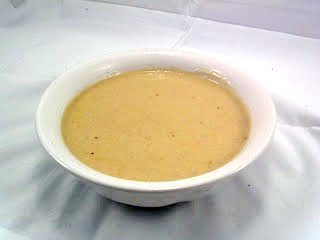 In another case of the chef not telling the entire story, I stumbled upon the lentil soup recipe for a restaurant called Sababa. Sababa is one of the several Israeli places around Bathurst and Steeles that offer shawarama, felafel, grilled fish, middle-Eastern salads, etc.

Sababa does stand out, however. It's the only restaurant that has its own grocery store where you can get Israeli and Eastern European goodies (canned, preserved and otherwise) to take home with you.

One of the dishes that Sababa is known for, is its lentil soup. I've had it and Another friend of mine was going on about it, so I decided that I should give it a try. Especially because the recipe is right on their website.

Well, I knew something was awry when the soup was boiling and it was clearly far too thick, so I added more water. I also toned the salt down exponentially, and used prepared stock instead of powdered. The original Sababa recipe advises to serve the soup with a wedge of lemon, however, we didn't have any on-hand, so we used around a teaspoon of lemon juice per bowl.

I must say that the resulting soup was okay, but certainly not inspiring. There was too much cumin and I made the mistake of pureeing the soup. Meredith thought it was a little pasty in texture. I won't puree it again.