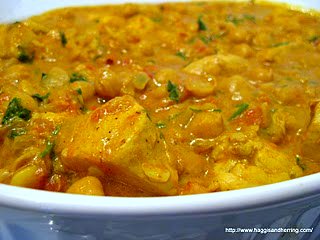 My first chicken curries were okay, but not the best. I always used generic curry powder and added some garam masala for a bit of sweetness.

When I started getting more adventurous in my preparation, I found a recipe in the Globe and Mail that inspired me to mix my own spices and I was off! The resulting chicken curry became one of my standards for a curry dinner on a Friday night (Friday nights being chicken night).

Chicken Curry
by Daniel Saraga April-24-2009
This chicken curry is one of my Friday night dinner standards. It's fun to make and tastes great. It was inspired by the Vij Family Curry recipe.
Ingredients
Instructions
1. In a large pan, heat oil on medium heat for one minute. Add onions and cinnamon, and sauté for five to eight minutes, until onions are golden. 2. Add garlic and sauté for four more minutes. Add ginger, tomatoes, salt, pepper, turmeric, cumin, coriander, garam masala and cayenne. Cook the masala for five minutes, until the oil separates.3. Add chicken to the masala and stir thoroughly. Cook for 10 minutes, until the chicken looks cooked on the outside. 4. Add sour cream, cream or coconut milk, and stir. Increase the heat to medium-high. When curry starts to boil, reduce the heat to medium, cover and cook for 15 minutes, stirring two or three times, until chicken is completely cooked. Note: poke the thighs with a knife. If the meat is still pink, cook for five more minutes. 5. Remove and discard the cinnamon sticks and add chickpeas. 6. If using bone-in chicken, cool curry for at least half an hour and transfer cooked chicken to a mixing bowl. After chicken has cooled a bit, peel meat off the bones and discard the bones. Stir the chicken back into the curry and heat medium heat until it starts to boil lightly. 7. Stir in cilantro immediately before serving.
Details
Prep time: 20 mins Cook time: 50 mins Total time: 1 hour 10 mins Yield: 6 servings