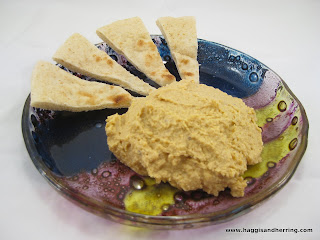 The most frequent request I receive from friends and family is about my hummus recipe. I don't think it's because my hummus is that much better than anyone else's hummus. I think it's because everyone else doesn't realize how easy it is to make hummus, and make it well.

I actually consider it a crime when someone buys store-bought hummus. Especially if it's some generic Canadian or American brand that doesn't actually taste like hummus, and actually has something crazy in it that has no business being in hummus - like mayo.

On one of our first dates, I took Meredith to an Israeli Mediterranean restaurant where she had her first taste of real Mediterranean salads. Her reaction was something along the lines of, "Why doesn't all hummus taste like this?" To which I responded, "It does. You've just never had real hummus before!"