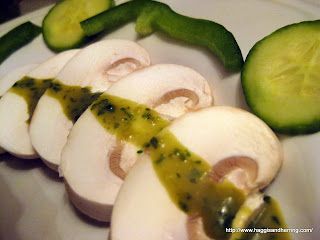 Throwing together dinner on a Wednesday, I decided to use the leftover cilantro in the salad. I've chopped it up directly in salad before but it just ends up sticking to the bottom of the plate, so I decided to research adding it to a salad dressing.

Surprisingly, there were several recipes available. Several of them were variations on using cilantro and lime juice, so I decided to run with that.

The result easily passed the Meredith test and she asked me when the recipe was going to appear on the blog. I hadn't even thought about it, so I quickly prepared some veggies to drizzle the dressing on for a photo.