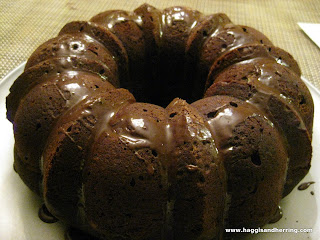 Heading out to a friend's house to see some out-of-towners, Meredith was asked to bring something with chocolate. Meredith understood this as a chance to break out her fancy-pants bundt pan.

Her first attempt didn't fare well. Well, not as a bunt, at least. It was crispy on the outside and dense chocolate on the inside, and it fell apart when it came out of the pan. That one stayed home and was shared with the neighbours who like chocolaty disasters as much as I do.

The second attempt (using a different recipe) turned out much better.

Instructions
1. Preheat the oven to 350-degrees.2. Spray bundt mould with cake spray or grease and then flour.3. Using a standing mixer and a large bowl, cut the butter into the sugar on low.4. Add the eggs one at a time, making sure the first egg is mixed in before adding the next.5. Slowly add the confectioners sugar.6. Add the flour and cocoa and continue to mix.7. Stir in the chocolate chips.8. Transfer the mixture to the mould and bake for 40 minutes or until a toothpick inserted into the middle comes out clean.9. After baking, let cake cool in the mould for at least an hour before removing.10. Whisk together confectioners sugar, milk and cocoa powder for glaze and pour over cake.
Details
Prep time: 20 mins Cook time: 40 mins Total time: 1 hour Yield: 1 cake