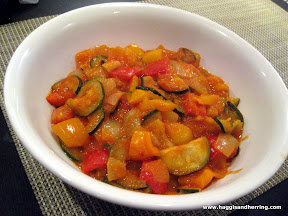 Back when I took some general interest culinary courses at George Brown, I learned to make a vegetable stew called a Pisto. The original recipe called for eggplant and half a recipe's worth of a sauce called sofrito.

I made it so often for a while that Meredith and I overdosed on it and I hadn't made it in a few years since.

Wanting to cook more vegetable dishes, I remembered how good the pisto tasted and found the recipe. Not wanting eggplant, I upped the peppers and used the entire sauce recipe (I like sauce). It's just as tasty as we remember.

Without overdosing again, we'll start eating this once in a while.

Pisto Manchego (Zucchini, Onion and Red Pepper Stew)
by Daniel Saraga June-17-2011
This Spanish vegetable stew is a meal on its own.
Ingredients
Instructions
1. In a dutch oven, heat 2 tbsp olive oil and add the peppers, onion and salt. Cook over medium heat until peppers are soft and set aside. 2. Heat the remaining 2 tbsp oil and add the zucchini. Continue to simmer, stirring occasionally, until the zucchini is soft. 3. Add the pepper and onions back to the mixture along with the sofrito. Let mixture come to a gentle simmer.4. Using a mortar and pestle, crush the garlic, cumin and a dash of salt into a paste and stir it into the pan.5. Cook an additional 10 minutes before serving.
Details
Prep time: 15 mins Cook time: 30 mins Total time: 45 mins Yield: 6 servings

Sofrito (Sweet Tomato and Onion Sauce)
by Daniel Saraga June-17-2011
This sauce is a key ingredient in the pisto, however, it's also good on its own in pasta, over rice or baked with chicken.
Ingredients
Instructions
1. Place all ingredients into a saucepan and bring to a boil.2. Turn heat down and let simmer for 15 minutes for sauce to thicken.3. Using an immersion blender, puree minture.Unused sofrito can be frozen.
Details
Prep time: 5 mins Cook time: 15 mins Total time: 20 mins Yield: 2 cups