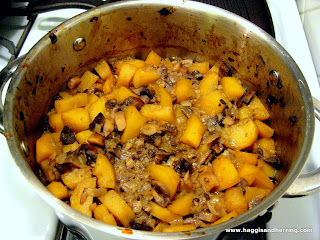 No Wednesday post this week because I joined the secret recipe club. The secret recipe club assigns you a member blog and you choose a recipe from that blog to make. You're not obligated to stick to the exact recipe, but instead, you can adapt it to your own taste or style.

I was assigned Cook Book of Trial and Error, by The Cooking Rookie. There were a lot of unfamiliar recipes and methods to choose from. Wanting to play relatively safe the first time through, I chose a potato and mushroom stew. It calls for the stew to be cooked in the oven, in a dutch oven - I've never done that before. My first throught was "I really hope my Jamie Oliver pot comes out in one piece!"

The recipe itself, named Chanterelles and Potato Stew called for chanterelle mushrooms, some chicken stock and a tablespoon of brandy. Since the recipe is from a site that emphasizes trial and error, I'm hoping that I'm forgiven for the liberties I took with it.

First, I couldn't find chanterelles, so I bought some portabella mushroom instead (and a good helping of white mushrooms as well). I also didn't have any brandy, but I did have some wine left from the previous evening and a bit of brown sugar to sweeten it up.

The one mistake I made was the time I chose to start cooking - we ended up eating about an hour later than planned.

Mushrooms and Potato Stew
by Daniel Saraga June-13-2011
This stew, inspired by the The Cooking Rookie, uses mushrooms and white wine for a tasty vegetarian bowl of comfort.
Ingredients
Instructions
1. Preheat oven to 375-degrees.2. In a dutch oven, heat oil over medium heat and saute onions until translucent and they start to brown.3. Add garlic and saute for another 1-2 minutes. 4. Add mushrooms and saute for 5 minutes.5. Add potatoes, butter, wine, brown sugar, salt and pepper, stir and let simmer for 20 minutes, stirring occasionally.6. Remove from heat, stir, cover and transfer to oven. Bake for 90 minutes.Note: in the event that you don't have an oven-proof pot, The Cooking Rookie recommends reducing the heat to medium-low, covering and stirring every 20-30 minutes. The potatoes with be a little mushed, but it will taste the same.
Details
Prep time: 20 mins Cook time: 2 hour Total time: 2 hour 20 mins Yield: 4-6 servings

The Hearth and Soul Blog Hop
Posted by Unknown at 7:00 AM