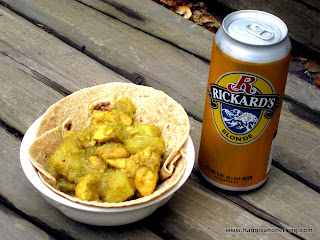 A couple weeks ago, I was contacted by my friends at Rickard's with a new set of recipes that really inspired. As regular readers know, I enjoy cooking with beer, and I've already made mustard, soup, and stew with various beers. The recipes are for a new beer, Rickard's Blonde, not yet available in Ontario. Rickard's Blonde is  a great-tasting pilsner. The bonus for us was the sample that would soon arrive in the mail.

When the package arrived by courier, I got a laugh out of the note that arrived in the box. 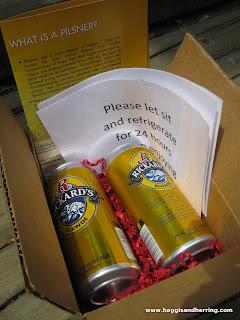 Clearly an attempt to slow you down from immediately cracking open (and likely spraying yourself with) a well-shaken can that spent the better part of a day bouncing around in a courier van!

In the package of recipes, one stuck out - it was a grilled chicken sandwich in an interesting marinade. I decided to modify the marinade to turn it into a a Caribbean chicken roti with potatoes. The original marinade recipe called for Scotch bonnet peppers. Unfortunately, the local grocery didn't have any in stock, so I used two jalapeno peppers.

The result was an awesome tasty chicken roti with potatoes in a thick sauce. There was just enough heat with the flavour that you felt the warmth for a short while after finishing the meal. Perfect. 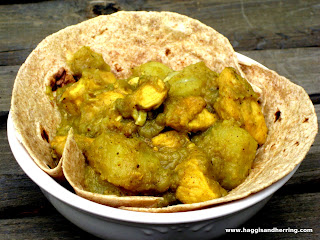