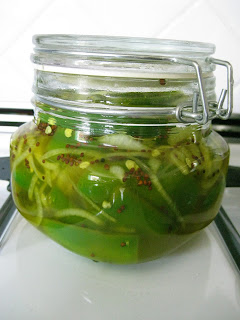 The sweet pickles from a few weeks back were such a success, I wanted to try some more pickle recipes using the same method (I found an interesting method of making pickles in the microwave at The Colors of Indian Cooking).

My favourite type of pickles (aside from the obvious dill in brine) are bread and butter pickles. While looking for a recipe that I could easily adapt, I also found a recipe for bread and butter style pickled jalapeno peppers at Simply Recipes. I opted to scale the recipe down a bit because I didn't have enough jars.

When the peppers colled, I tasted one and it's not bad. Not super-hot and the pickling gave it a nice tang.

Jalapeno Bread and Butter Pickles
Recipes by the Haggis and the Herring: tasty world recipes tested in our kitchen
Try other tasty recipes
Posted by Unknown at 6:30 AM