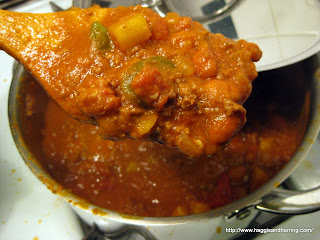 In early October, I was speaking to a colleague about the upcoming hunting season. Not wabbit season, or duck season...

My colleague usually takes his deer to a butcher before bringing it home for packaging and he still had some left in his freezer from last year.

Well, I was glad to take some off his hands to free up some freezer space and shortly after, I was presented with a couple venison steaks and some burger (ground). I immediately went to work looking for what to do with the meat. I didn't want to do something plain, and I wanted something that would best reflect the fall season.

I found a few chili recipes that interested me. One of them had pumpkin, ale and some sweet potatoes. I decided to use that concept as a starting point for what I made. The result was a very large pot of tasty chili.

Try other tasty recipes
Posted by Unknown at 10:25 PM