When one recipe feeds another

When I saw Jules Food's recipe for pink pickled eggs, I immediately wanted to try it. However, I also wanted to make the beet broth fresh (Jules used canned beets), so I had to make picked beets as well. Perfect, a double project (and way more work than I originally anticipated). 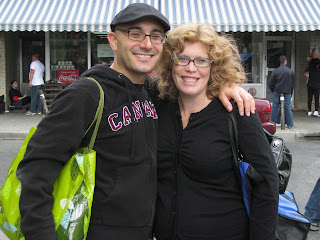 When we went down to Kensington Market to shop, I started noticing that the beets were calling me, but I was distracted by Meredith and my new anniversary hat and some crazy wind (Meredith's hair is usually way-more under control).

The final kick was when Meredith dashed into the knitting store and I wandered into the Grilled Cheese where they had an awesome wall of pickled things. 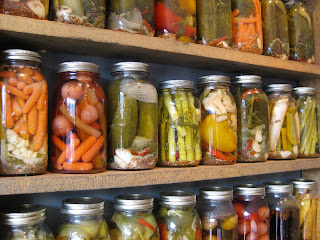 I wanted to do some more pickling.
My biggest problem is that I didn't really have the proper jars, so I ended up cramming the eggs into a small mason jar (should've used a larger one) and using some jam jars for the beets. This resulted in the eggs being so tightly packed that the sides against the jar didn't absorb the colour very well, and the beets not being fit for long-term storage. I always recommend proper sterilized mason jars with new lids.

Try other tasty recipes
Posted by Unknown at 6:30 AM