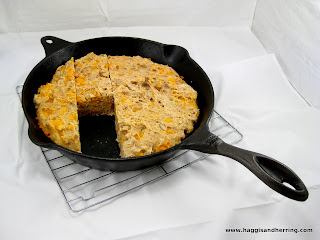 At the beginning of September, I was starting to panic - I hadn't cooked very much and I was running out of completed recipes for the blog. At the same time, things were just plain busy - and beans on toast was for dinner.

That afternoon, before starting dinner, I saw a recipe that inspired me to make a change to dinner plans - and bake... sort of. Food Floozie had just wrote about a buttery beer bread covered in cheese. Not wanting to completely duplicate her efforts, I switched things around a bit. I used olive oil instead of butter, and not nearly as much cheese (read: I ran out of cheese).

By the time I got the bread into the oven, neighbours dropped by to invite us to supper - so the bread ended up being a yummy pre-dinner snack (and part of my lunch for the following day!).

The final result was great - warm, dense, soft, and it still had a cheese and onion-y goodness to it. I imagine it wasn't as rich or tasty as the Food Floozie's, tho.


Try other tasty recipes
Posted by Unknown at 5:00 AM