For our anniversary, Meredith and I didn't just want to eat out - we wanted to dine. North York isn't exactly abundant in fine dining, however, there are a few places where you can get a nice meal. 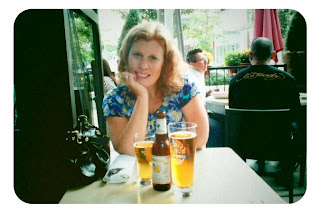 The Shops on Don Mills is full of boutique type stores and some nice upscale restaurants. Among those restaurants is Linda by Salad King.  Linda is not Salad King - it's quite different. You don't get to choose the level of heat, nor do you sit at benches next to other diners. It was a beautiful evening so Meredith and I sat on the patio, however, the interior is quite nice - not too modern but quite elegant.  We started with some beers before ordering. 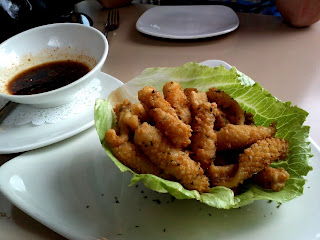 Meredith and I started with the Sea Queen - calamari fried and breaded with butter and thyme. It was served with a honey and chili sauce. The calamari was a little oily, however, the honey and chili sauce was so feakin' good it didn't matter. It was all we could do to not finish the remaining sauce with a spoon. 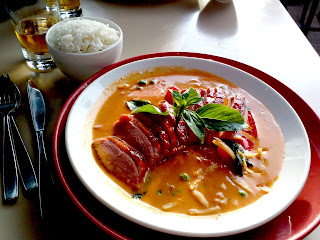 For my main, I chose the duck in red curry sauce. The duck was smoked and grilled, and served with vegetables  garnished with Thai basil. The skin on the duck was crispy and the duck was soft and perfect. I added the rice bowl to the additional sauce and even mixed the basil in. Meredith's opinion of the duck was pretty much the same as mine - she really liked it - almost as much as her main. 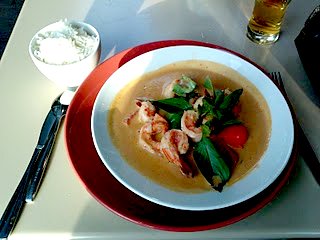 Meredith had the shrimp panang curry, made with peanuts and coconut milk, served with vegetables and Thai basil. The sauce wasn't terribly spicy, however it was incredibly tasty. The shrimp was great, too. Not overcooked and rubbery as I've had elsewhere. 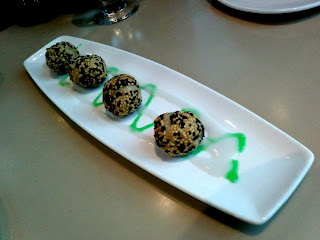 By the end of dinner, we were stuffed, but Meredith had checked the menu online earlier in the day and had her heart set on a particular dessert - the chocolate burst: deep fried glutinous rice ball rolled in sesame seeds and stuffed with dark chocolate, drizzled with mint and coconut syrup. It was a great dessert - not too sweet and a perfect quantity for the two of us.

Overall, we were more than impressed. Dinner, including three drinks, totalled just under $100 - not inexpensive, however, not bad for the quality of the meal and service. We definitely want to go back again.