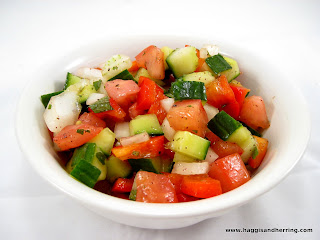 Now I must admit, this is a slight variation on the traditional Israeli salad that only contains cucumber and tomatoes, however, the variations are still within the boundaries of acceptable salad. The big difference, however, is in the preparation. Apparently, it's a big contest as to who can chop their vegetables smaller. The smaller the vegetables, the more fancy-pants the salad. I just didn't have the time or the will to to that, so mine is in more reasonable chunks. I'm not going to get worked up about it.