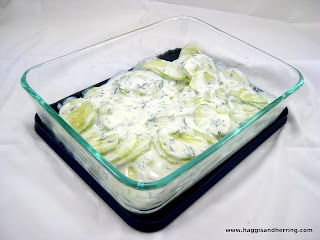 Another month, another Secret Recipe Club recipe. This month, I was assigned the Gonzo Gourmet, a blog from Southern California that focuses on lighter cooking - salads, desserts, sandwiches, etc.

Since Labour Day was fast approaching, I figured a simple salad for our small barbecue would be appropriate, and I chose the cucumbers with sour cream and dill. The only real change I made was salting the cucumber first (to drain the water) and I swapped out the sour cream for Greek yogurt. They taste very similar, however, the yogurt is fat-free.

I decided to use my food processor for the slicing, and in doing so, I managed to destroy an entire cucumber. I had forgotten to remove the part that allows the slices to fall into the machine's bowl, so once sliced, it whirred around and around until it was nearly mush. I put the mush aside and drained it for tzaziki sauce. After properly slicing the cucumber on my second attempt, it was smooth sailing.

Although there's Greek yogurt and cucumber, I must say that it tasted nothing like tzaziki sauce, as I was expecting. The vinegar added a nice tartness to the salad and we really enjoyed it.