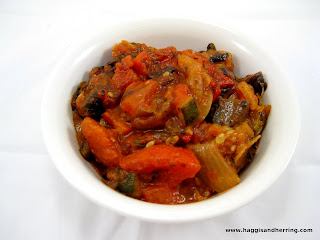 Looking at the recipes I've published during the last month or so, I realized that since fixing my barbecue, I've been grilling quite frequently. In a previous life, I barbecued Moroccan sausages 12-months a year. As long as I had a beer in my hand and I was bundled up, I was good. I might restart that tradition.

Ever since I saw the movie Ratatouille, I've wanted to try making my own version of the vegetable stew. I even found a couple of recipes that follow the signature dish from the movie. The presentation is just as beautiful in real life as it was on screen, however, it was a little too much for me. I wanted something more rustic (read: less complicated preparation).

When I saw Alea's grilled ratatouille, I thought I had found what I was looking for as a starting point, but I didn't realize what I was getting myself into. I took Alea's idea of grilling the vegetables before the finer chopping, chose my own vegetables and quantities (similar to hers), and added some tomato sauce as well.

Where things went south for me was in the cleaning department (I like one-pot dishes): I used more bowls than I thought I would for the prep (with all of the vegetables soaking in oil); chopping the vegetables after grilling, but before adding them to the pot with sauce also got messy. Really messy. I'll make sure to take appropriate measures next time and avoid a much bigger cleanup job than I had originally anticipated.

Taste-wise, it was a huge hit. Everyone loved it. I'll definitely be making it again.

A couple days later, for the benefit of the movie-going crowd, I served the leftover ratatouille over linguini (har, har).


Try other tasty recipes
Posted by Unknown at 8:00 AM