I've been going to the Barrie Auto Flea Market with my uncle for nearly 30 years now (with the occasional year or trip missed).

Historically, food at this event is pretty terrible. Carnival grade burgers, hot dogs, fries and pizza was about it for years, until a couple years ago. When it's lunch-time, we now go to Hank Daddy's Barbecue. 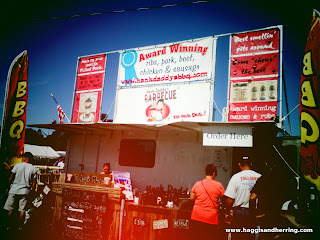 Hank Daddy's offers pulled pork sandwiches, barbecued chicken sandwiches, smoked sausages and sides of baked beans, mashed potatoes and cole slaw. They make their own barbecue sauce and sell it by the bottle. 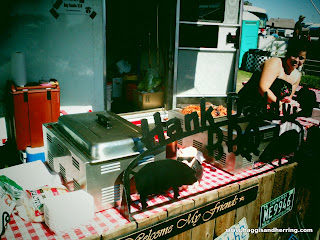 The kitchen/trailer was bustling and there was a decent line. It's not the fastest moving line, but it's absolutely worth it.

Oh, I forgot to mention one other item on their menu - they also off the pulled pork parfait. I just had to try it. So I did:

It was great, and it beats the pants off the food offered by other vendors.

If you're interested in cars or flea markets, you can also check the album on my photo blog.


Try other tasty recipes
Posted by Unknown at 10:00 AM