As I mentioned before, leading up to the birth of our new addition, I cooked like a madman queuing up posts for a few months in case I wasn't able to commit myself properly to the project during the first few months.

Nearly one month in, I was starting to cook again on somewhat of a regular basis. Nothing worth writing about: some dishes with prepared ingredients, others from previous posts, but cooking nonetheless.

At about the one-month post-baby mark, I was putting together a menu for the week including trying out some new stuff and out of the blue, Meredith announced that she was going to make cookies. I got to choose the recipe, so I dove into my trove of saved recipes from my fellow food bloggers and found one from Two Peas and their Pod that really drew my attention (and we had all of the ingredients in stock).

I set up the mixer and brought the ingredients down from the higher cabinets (she's still wasn't able to lift heavy objects), she wrapped herself up with Jeremy in a 30-foot long contraption and she was off! 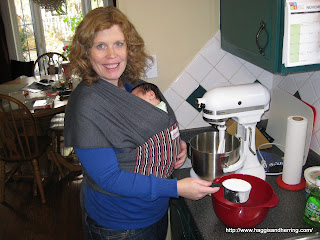 The result brought smiles everywhere (except for Jeremy, who can't eat cookies... yet.)

Recipes by the Haggis and the Herring: tasty world recipes tested in our kitchen
Try other tasty recipes