Every year we have a boys road trip on my dad's side of the family. The trip is organized by a cousin of mine who chooses one or more destinations, arranges for accommodations, a sports events, and a general itinerary.

This year, I decided to consult my food blogging community, and it really paid off. Since the final destination was Detroit, I emailed my friend Yenta Mary at Food Floozie. I've frequently read her reviews of good eats in both Ann Arbour and Detroit.

Mary recommended that we go to Slows Bar B Q on Michigan Avenue in Detroit. We arrived pretty late, maybe 9 p.m., but the place was still bustling and we didn't make reservations. We happily waited at the bar.

The bar was excellent. With an extensive wine list and around 20 beers on tap with a healthy list of local breweries, I didn't mind waiting a short while. Going on the bartender's recommendation, I was very happy with the Motor City Lager from Motor City Brewing Works.

After a short wait, we were seated at a large table and drooling over the menu. I settled on "The Reason" on a kaiser roll with a side of mashed sweet potato. The reason is described in the menu as "Niman Ranch pork butt, smoked slow and pulled, bathed in sauce and topped with our signature coleslaw and dill pickle strips."

The sandwich was excellent - I savored it slowly. There wasn't too much sauce to overpower the pork - it was a perfect balance of flavors. I actually tried to eat it with the pickle and slaw inside the sandwich and it fell apart a bit, but that's part of the experience.

The side of mashed sweet potatoes was okay, but the other sides, which we all shared, really got my attention. The Mac-n-Cheese was an excellent dish of pasta shells baked in a cheese sauce, and the waffle fries in cheese sauce were done well. Not greasy at all. I would've liked to try the baked beans and corn bread, but there was so much food at the table already, we just couldn't.

My brother, Abisaac from Gluten Free Edmonton was very impressed that Slows makes all of their sauces from scratch and clearly marks the gluten-free options on the menu. He had the Baby Back Ribs, and they were great. A dry rub didn't mean dry ribs, they were just right.

We were even impressed with their vegetarian offerings. I thought my cousin Jack was going to be stuck with a large bowl of Mac-n-Cheese (which wouldn't have bothered me), but he was quite content with his namesake dish, the Hoppin' Jack: black beans served over rice with cheddar cheese, tomato and scallions.

Other dishes at our table included the jambalaya, brisket and salmon. All excellent.

Since it was my dad's birthday, we finished off with The Chuck Norris for dessert, Chocolate and Oreo Brownie, Ray's Detroit Club Coffee Ice Cream and Sander's Hot Fudge. Quoth the menu "It'll kick you in the face." We managed to share it between all eight of us as we were full from the rest of the meal. 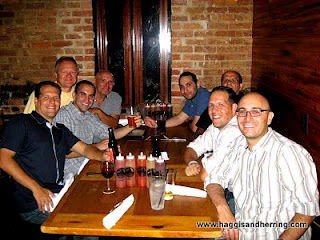 It's not very often that a party of eight goes to a restaurant, some with special dietary needs (be it vegetarian, or my vegequarian uncle who ordered the salmon), and every single person was more than satisfied with the meal. The next time I'm even as close as Windsor, Ontario, I'll be making a point of taking the tunnel to Detroit for another visit to Slow's.

Recipes by the Haggis and the Herring: tasty world recipes tested in our kitchen
Try other tasty recipes
Posted by Unknown at 1:00 PM