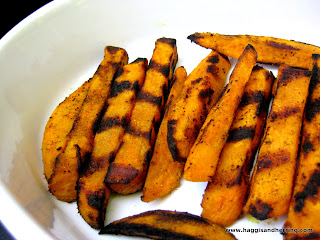 For the August edition of Secret Recipe Club hosted by Tina of Moms Crazy Cooking, I was assigned Steak and Potatoes Kinda Gurl. Anyone who knows me, knows that I'm the polar opposite – I'm an anything but steak and potatoes kinda guy. If I was going to do this, I was doing it my way. I just had to find some inspiration.

I found the inspiration when we went to the Evergreen Brickworks, on the site of the old Don Valley Brickworks. Jacob made some pottery for a community project and helped organize a garden. The guy manning the garden was also making sweet potato fries in a cast-iron pan over a fire. They weren't bad, and they gave me an idea for Secret Recipe Club. I remembered seeing a recipe for garlic oven fries.

With my apologies to the Steak and Potatoes Kinda Gurl, I ran with the idea of fries, and mostly left reality from there. I decided to use curry powder instead of garlic salt and basil, and opted for a sweet potato instead of the standard fry potato. Oh, and I didn't use an oven either. Instead, I used my recently repaired barbecue.

Does that still count? I hope so!


I was sure to use SPG's method of partially cooking the potatoes in boiling water first - I think that's a very important step for good roasted potatoes, and it's a method I only recently picked up. What a difference it makes!

It was my first time grilling sweet potato and it turned out really well - not as crispy as I would've liked (I'll cut them thinner next time), but even our nine-month-old devoured them.