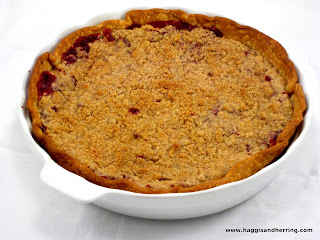 There were leftovers from Strawberrypalooza in June/July. I really didn't think we had that many strawberries. I was clearly wrong.

Wanting to get rid of the last of the strawberries before they deteriorated into mush, Meredith decided to make one more pie. This pie would be a more traditional baked pie with a crumble topping. Meredith had a recipe for a rhubarb pie that she was able to adapt to get the results she wanted - the most significant change being reducing the amount of sugar.