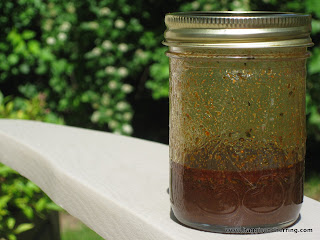 Several years ago, when I was living on my own, I frequently ate what I called "kitchen sink salads." It was my entire meal. I'd buy some nice bagged lettuce or spinach (I'd refer to it as "garden weeds"), use either grilled chicken or hard-boiled egg for protein, and add whatever else I had around. That usually meant tomatoes, some sweet onion, hearts of palm, feta, and olives. I frequently made my own dressing as well because I've never been fond of store-bought vinaigrette.

This salad was one of the first things I made for Meredith. When we moved in together, I practically wasn't allowed to buy salad dressing - I had to make it myself. I think the only recent exception to that is the occasional bottle of Caesar dressing.

Recently, when a friend visited, I was asked what ever happened to the balsamic vinaigrette I used to make. I realized that I hadn't made it in some time and frequently make other less complex (and less tasty) dressings (and salads, for that matter). I decided it was time to give the kitchen sink salad another whirl.

Balsamic Vinaigrette (for a kitchen-sink salad)
Recipes by the Haggis and the Herring: tasty world recipes tested in our kitchen
Try other tasty recipes
Posted by Unknown at 10:00 AM