When rhubarb was ready to harvest, a generous colleague handed me a bag with at least a couple pounds of the red stuff. My first thought was "I can only eat so much pie!" Then I realized that there might be an alternative.

After tweeting about my newly found produce, and lamenting that I could only find dessert recipes, the Food Floozie came through. She had just finished making a chicken curry in a rhubarb sauce, and if I could sit tight, the recipe would be posted by the next morning. What luck!
The Floozie's curry was an interesting one. The sauce was made separately the chicken and it used wine. The chicken was pan fried, and the whole concoction goes into the oven to finish off. It looked great.

After a short conversation about the dish, I discovered that I could use orange juice (which I had) instead of wine (which I didn't have) and I made a few other changes to make it my own. 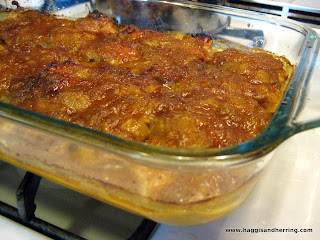 When I took it out of the oven, it was awesome. The brown sugar had caramelized and the sauce was sweet and spicy. Meredith said that it reminded her of the curries her mom made when she was a kid.


Try other tasty recipes
Posted by Unknown at 10:00 AM