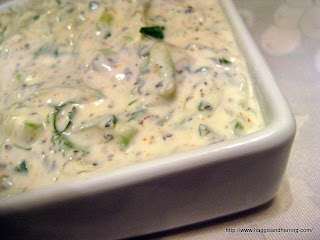 It was beginning to look a lot like Christmas
Regular Friday night dinners didn't start up again until late December. Regular, meaning I cooked and my mom didn't show up with nearly all of the food already prepared.
The weekend before Christmas, Meredith invited several friends from the travel industry for a nice dinner. I started cooking the night before just because I didn't have enough pots, pans and stove-top space to keep things sane.
The dinner also provided me an opportunity to take pictures of a couple dishes I hadn't previously photographed, including my channa masala and chicken tikka masala.
To compliment the chickpeas and the rice dish I made (no recipe for the rice, just some cloves, saffron and a bit of turmeric), I made a great cucumber ratia. I took extra care squeezing the liquid from the cucumber and using whole-milk yogurt to make it nice and thick. If I had salvaged more mint from my garden before the frost killed it, it would've been even better!
Cucumber Raita